An Elevator on the moon

Going Back to the Moon and Our Lunar Space Elevator Infrastructure 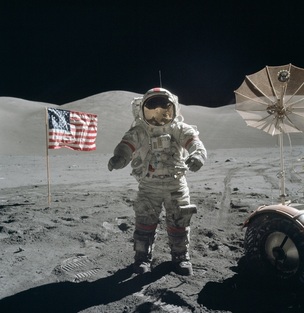 ​​In 1969, two astronauts set foot on the Moon. It was heralded as a milestone in human achievement, proof that scientific advancement can let humans do things that for thousands of years we could only dream of. But today in 2016, the Moon is somehow still out of reach. While a few rovers, and satellites are still sent to the Moon, no one has touched the surface since the last Apollo astronauts in 1972. That was 44 years ago.

There are good reasons no one has been back. Soft landings on the Moon are incredibly difficult due to the lack of atmosphere, even harder than a soft landing on Mars. If we wanted to land people back on the Moon, it would require a Saturn V class rocket, which no country makes. For NASA, the Moon was mainly a propaganda tool. When Neil Armstrong landed, the US claimed their victory as the only nation to achieve such a feat. But after that, every successive mission (and Apollo 13 made this very clear to the NASA Administration) risked the death of their crew, after which the public would likely turn on them. Any loss of life would outweigh the little gained by briefly sending more men to the Moon. At the time, there was little evidence that the Moon possessed anything of value for us, and even if there was, the Apollo astronauts could bring little of it back.

But today we know there is ice on our Moon. This makes any kind of settlement attempt much easier because we don't need to bring all our own water (which weighs a ton). And interestingly, that same lunar ice melted into water could be split into hydrogen and oxygen, the main constituents of rocket fuel. This could make the moon a hub for future space missions.
​Concept: The natural environment and gravitational phenomena, including the orbital mechanics of the Earth-Moon system, or “cislunar space”, provide opportunities to deploy engineered systems which lower the cost of delivering payloads to locations throughout cislunar space, including the surface of the moon. While the more commonly understood “Earth Elevator” concept, in which cargo ascends and descends a tether anchored to the surface of Earth, has received public and academic attention in years past, the less obvious “Lunar Space Elevator Infrastructure” affords a more near term opportunity to quickly develop initial operating capability with current technology in a more conducive environment.


Benefit: The overwhelming benefit provided by Lunar Space Elevator Infrastructure is to provide propellantless delivery of cargo to and from the lunar surface from more accessible locations in cislunar space. By using a solar powered “elevator car” to deliver cargo to the surface of the moon, entire spacecraft systems (such as landing gear, descent engines, and propellant) are no longer necessary to conduct mission operations. For example, to deploy a habitat or rover on the surface of the moon, it can be gently lowered to the surface using LSEI rather than lowered with rockets. By the same mechanism, LSEI enables the lifting of lunar regolith from the surface of the moon into space, where it can be chemically processed to provide iron, oxygen and other useful and saleable materials, or it can be mechanically processed to erect large structures otherwise not launchable by current or conceived launch vehicles.


Simplified Architecture: A counterweight being pulled toward earth balances the weight of cargo being delivered to and from the surface of the moon.
​

Functions of the system include:
● Mechanically linking the counterweight, lifter, and lunar surface anchor (via tether)
● Lifting and lowering cargo along the tether (with a lifting robot)
● Counterbalancing the gravitational pull of the moon on the mobile cargo (with a counterweight sufficiently close to earth)

For more specific details on the various aspects of this project, please browse our Lunar Space Elevator Infrastructure briefing documents.
​